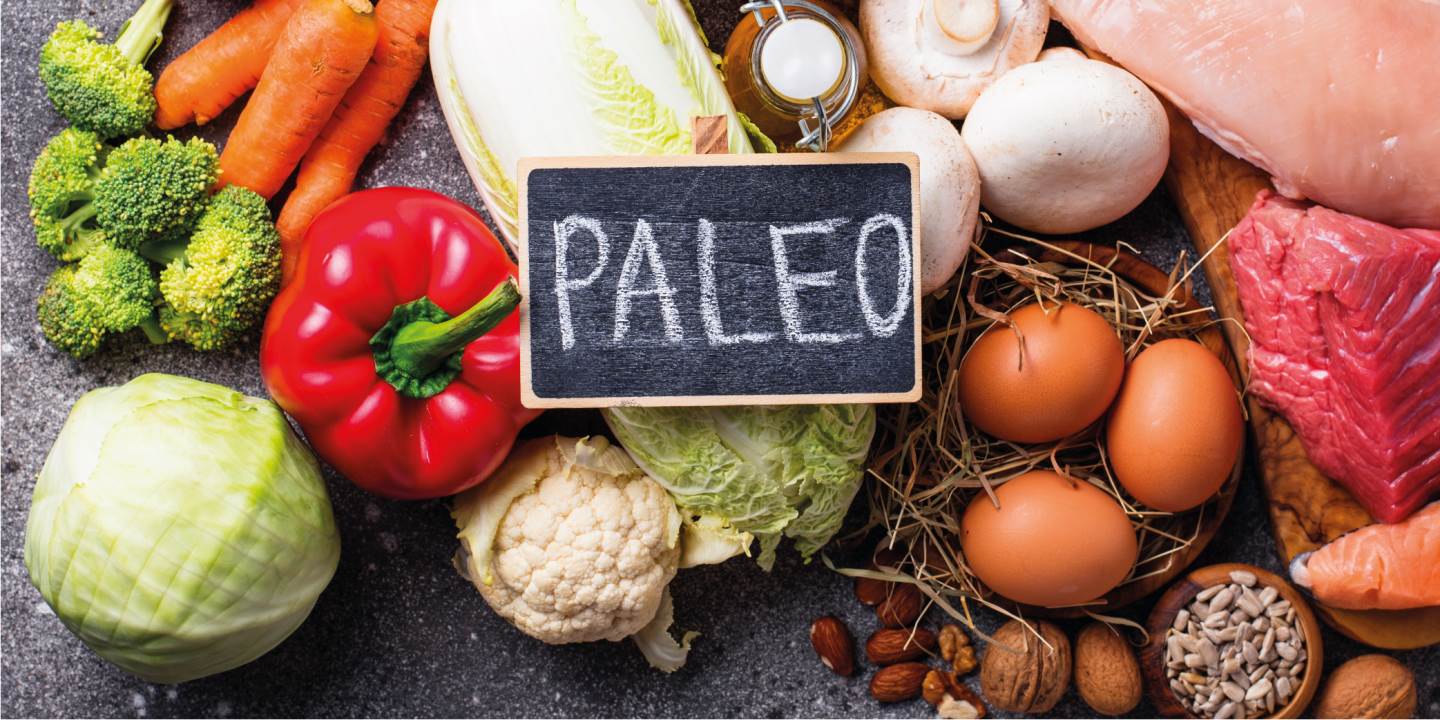 The Paleo Diet (PD) is a trendy weight loss diet that’s popular in magazines, diet books, websites and cookbooks. It is also known as the Stone Age, Paleolithic or hunter-gatherer diet. The PD is essentially a low carbohydrate, high fat diet, similar to the low carb Atkins Diet of a few years ago.

The PD is based on the idea that “our ancestors” from the Paleolithic period were “hunter gatherers” who ate “anything that they could hunt, catch, pull out of the ground or pick off a tree.” It allows red meat, including organ meats (liver, brain, kidney), eggs, seafood, poultry, nuts, seeds, non-starchy vegetables, some fruits, olive oil and coconut fat/cream/milk. The diet encourages followers to avoid highly processed foods with refined sugars, starches, oils, and salt. While eating this way is likely to mean eating less “junk food”, clearly you don’t have to follow a Paleo Diet to do this.

Other foods that are not allowed on the diet are whole grains, legumes and dairy. According to the PD creators, we have not “evolved” to be able to digest them, due to “anti-nutrients” in grains and legumes, and lactose in dairy. Lactose intolerance is a legitimate concern for some. But the “anti-nutrient” lectin in legumes is only a concern if legumes are eaten raw or uncooked, which of course would make them inedible. There is no concern when eating cooked legumes as lectins are almost completely neutralized by cooking. Phytate, the so called “anti-nutrient” in whole grains and legumes, is reduced significantly by normal cooking and processing methods such as soaking, sprouting, fermenting, blending or yeasting—making it easier for the body to absorb important minerals from the grain or legume. Small amounts of phytates and lectins as part of an overall plant-based diet are no longer considered “anti-nutrients” but rather “pro-nutrients” as they have beneficial anti-inflammatory, antioxidant activity.

Although avoiding fried and highly processed junk foods on the PD has obvious advantages, especially for quick weight loss, the disadvantage is that these foods are typically replaced with unlimited amounts of fatty meats. Although you may be able to lose weight on the PD, you do so at the peril of your overall health. For healthy sustained weight loss, the goal should be to not only avoid junk foods, but to eat foods that also reduce your risk of chronic diseases like heart disease, cancer and diabetes.

Since the PD dietary recommendations discourage consumption of two important whole plant food groups (whole grains and legumes) known to protect from disease and instead encourage foods known to increase disease risk, the PD diet should be considered with suspicion. Whole-grains and legumes are important sources of quality carbohydrates that help improve blood sugars, satiety, blood lipids, reduce chronic inflammation and reduce risk of chronic disease. Whole-grains and legumes are also important sources of protein, dietary fiber, vitamins, minerals (i.e., iron, zinc, magnesium, calcium, etc.) phytonutrients, free of cholesterol and low in fat (except for soybeans and peanuts). Grains and legumes are also a very important food choice for millions of people globally who rely on these foods as the mainstay of their diet. There are currently no robust studies that have shown a longevity benefit for the Paleo Diet. In contrast, there are a number of significant large studies showing links between plant-based diets and longevity, giving us clues to what extends life and keeps people well. The dietary patterns of sub-groups who live the longest and have an active lifestyle such as those living in areas of Sardinia, Okinawa, and Costa Rica do not match the dietary pattern of the Paleo Diet.

The Advantages of the Paleo Diet:

The PD advocates minimizing intake of sugar and salt and eating “real foods” that are “natural” and unprocessed. Followers of the Paleo Diet start to be more conscious of what they are eating and will often eat more whole foods with less sugar and highly salted processed foods but in turn will consume foods higher in saturated fat.

The Concerns of the Paleo Diet:

The Paleo Diet ignores the recommendations of major health and research organizations to reduce intake of red and processed meats and increase plant food intake. The US News & World Report (2016) ranked today’s Paleo Diet as #32 of 38 popular dietary patterns as they viewed it as one of the few diets that was unsafe and nutritionally incomplete due to elimination of major food groups. Their concerns were based on the high fat and cholesterol content of an unlimited consumption of meat and lack of protective nutrients and phytochemicals from plant foods because consumption of grains and legumes and other complex carbohydrates are restricted.

Consider the source of carbs (ie, lentils vs candy; wholegrain breads vs donuts). Carbs from plant sources provide important nutrients and protective phytonutrients. There is no need to avoid or drastically cut back on complex carbs—emphasis should be placed on consuming quality carbohydrates that are digested slowly such as whole grains that result in reduced blood glucose spikes and lower the risk of heart disease. Grains and legumes are important contributors of key nutrients: grains provide fiber, folate, niacin, thiamine, iron, zinc, magnesium, protein and carbohydrates; legumes provide fiber, mostly low GI carbs, B vitamins, iron, zinc, calcium, magnesium and phytonutrients.

Grain foods (mostly wholegrain) promote health and protect against disease when part of a balanced diet. Grains and legumes are also important contributors to the health of our gut microbiome—eliminating them can cause dramatic changes in our gut flora. Claims that our “ancestors” did not experience heart disease, cancer and diabetes ignores the fact that few people lived past their reproductive age, and physical activity ensured people were lean. The original Palaeolithic Diet probably resembles a plant-based diet with greater emphasis on gathering rather than hunting game. In fact, we are told our ancestors ate a lot of plant food, as evidence shows they gathered far more than they hunted.

6. Paleo Diet is not a well-balanced, evidence-based, varied diet

The lack of long-term evidence for the Paleo Diet “health claims” is particularly concerning and potentially dangerous given the popularity of the diet. Unlimited consumption of meats is linked to increased risk of colon cancer and is a contributor to overweight/obesity, type 2 diabetes and heart disease. The Paleo Diet is lower in fiber, polyphenols as well as vitamin and minerals associated with grains, legumes and dairy. The US Dietary Guidelines recommend plant-based diets such as the Mediterranean, Asian, and Vegetarian as examples of well-balanced dietary patterns for overall good health and wellbeing.